Don't forget to bring back your name and address sheet this Sunday for our relaunching event after we move in. Remember, what we're looking for is names and contact info for at least 10 people you know of that you'd like to invite to church/special event when move into our new location. Don't forget that when we mail these out, you'll need to follow up with a personal invite. We'll let you know when we get the final date for that event set (it will, of course, depend on when we can get into the building).

We are still working on that. Currently we're waiting for drawings so we can get permit stuff going. After we get that going, the representative for the owner will set a date for the lease.

Just received this from Judy Ware:

Please keep my brother in your prayers tomorrow as he faces surgery on his right eye for several complications due to diabetes. He has lost most of the sight in that eye and they are only doing surgery to try to maintain the current condition of his eye so he won't lose the eye. In addition, he will be having a cataract removed, torn retina repaired, laser surgery on the bleeding blood vessels, as well as the steps needed to hold the eye at it's current state. He will be having this under a local anesthetic since he can't be put to sleep due to his kidneys. He is anxious to say the least.

Let's be in prayer. Also, I believe William Flynn's surgery was moved to NEXT Tuesday!

We're waiting for word on our new lease. Drawings being done this Thursday--we're moving forward.

I just got word from Kathy Umberger that William is scheduled for back surgery for a herniated disc on Tuesday at 10:30 at Northside Hospital. It is an out patient surgery.

Please be praying! Thanks!

Also, the building plans are moving forward. We are having an architect draw up changes to the existing structure so we are ready to have the permit process completed. All this may set us back a few weeks, but not much more.

Jason
Posted by Castle Christian Blog at 9:17 AM

I had photos of the "Cabin" where we plan to have the retreat in April. I think most liked what they saw. The concensus is to have the retreat one of the last two weekends in April....AFTER Spring Break and Easter. I have 10 DEFINATE participants and one MAYBE, so there are only 9 spaces left.....I will keep everyone updated as new developments come along.
Patti
Posted by Patti at 9:59 PM

Tentative plan for October 18 and 19, 2008. Send Janet Otts jotts52961@yahoo.com 10 names and contact info of people who have come once or who you would like to come for the first time, and then follow up after you have been advised that CCC has reached out to them.
Posted by Patti at 9:56 PM

I know that there are several people who use the "Listen Online" feature of the website, rather than the podcast. I wanted to announce that we've changed the format of the listen online page. You're probably used to a set up that looked like this: 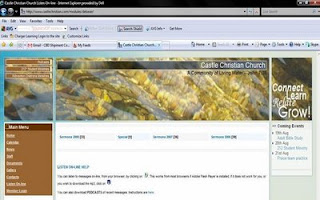 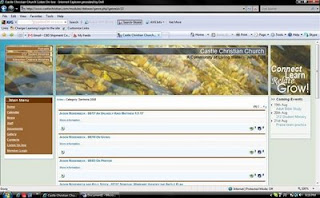 We have a new set-up which uses widgets. When you go to the listen online page, you'll see two widgets. The top one contains the most recent messages, the bottom one is an archive. To listen, you can scroll through the widgets and push the play button at the message you want. It will take a moment to download, but then it will play. 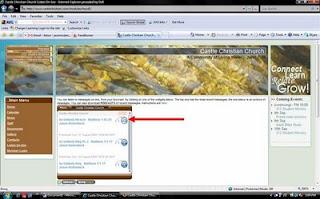 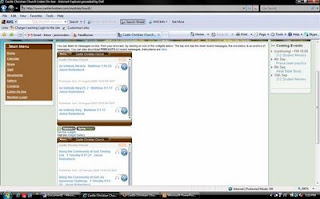 Also, you'll want to go check out some of the recent changes to our website.
Posted by Castle Christian Blog at 3:14 PM